Login
Sign up
Use Cases
Company
← All storiesNext story →

With insights from Andrew Pattison 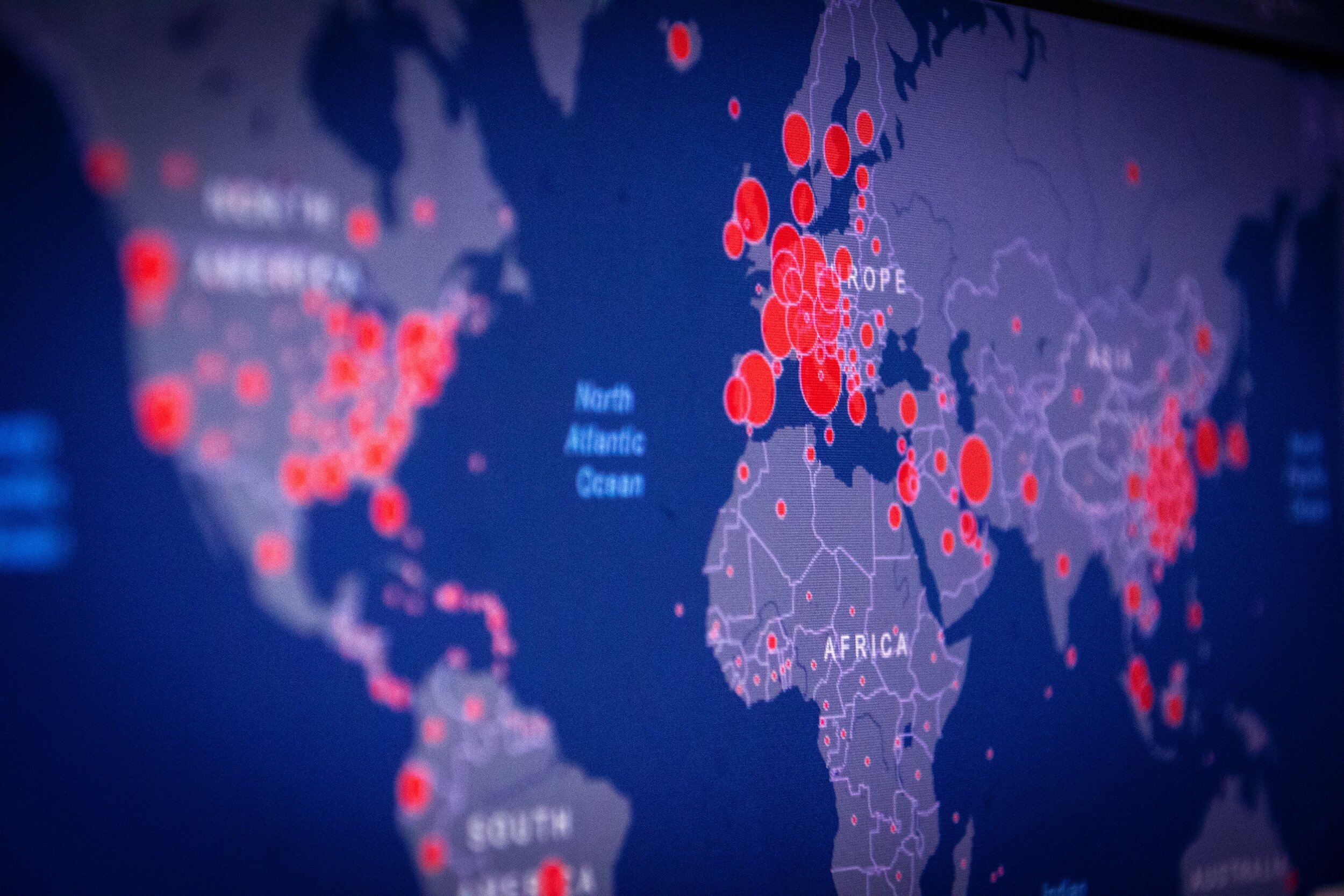 Global
Give it a try

The World Health Organization (WHO) partnered with Praekelt.org using its behavioural chat platform, Turn.io, to launch the WHO's first-ever WhatsApp information service, its WhatsApp Health Alert. The service reaches tens of millions of people with up-to-date, reliable information during the ongoing COVID-19 outbreak.

From brief to launch

Available in over 20 languages 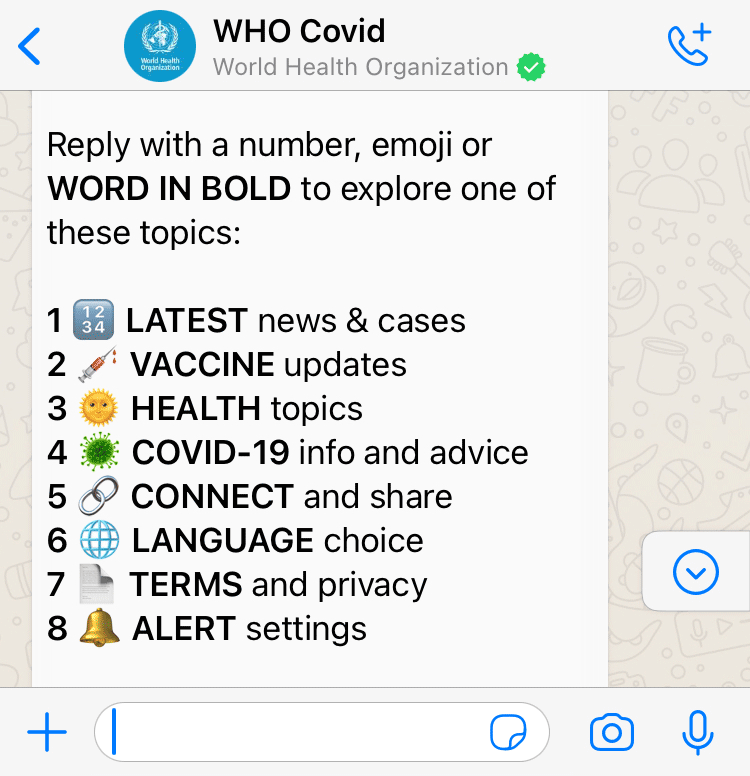 What is Health Alert?

The WHO's free, automated 24-hour WhatsApp Health Alert provides up-to-date Covid-19 information including the latest figures, how the virus spreads, symptoms and treatment via a user-friendly menu of options.

To activate the service, users simply click on a link now widely promoted by Facebook and then text the word "Hi" to +41 79 893 18 92 on WhatsApp. Next, users are prompted to select from a menu of available types of information, including news updates, myths, travel advice and commonly asked questions.

"For us, the launch quickly and iterate often model has been key to success — absolutely key."

Andrew Pattison, Manager of Digital Solutions, WHO
Talking about the key aspects of fast-paced development

The WhatsApp Health Alert uses Turn.io's unique behavioural chat application, which integrates directly with WhatsApp's Business API, to allow health organisations to communicate directly with people to reach to affect change — and do it more cost-effectively than via traditional messaging systems. In the era of Covid-19, misinformation can spread faster than the virus itself. And, when a new virus hits, what science knows about it can change from one day to the next. In response, Turn.io (with its parent company, Praekelt.org) partnered with the WHO to create its WhatsApp Health Alert to help people around the world avoid disinformation and stay-up-to-date with the latest Covid-19 information. Praekelt.org was the first social impact non-profit organisation to use WhatsApp's Business API.

The innovation is helping fill some countries' most basic communication needs while freeing ministries of health to respond to pressing healthcare demands. 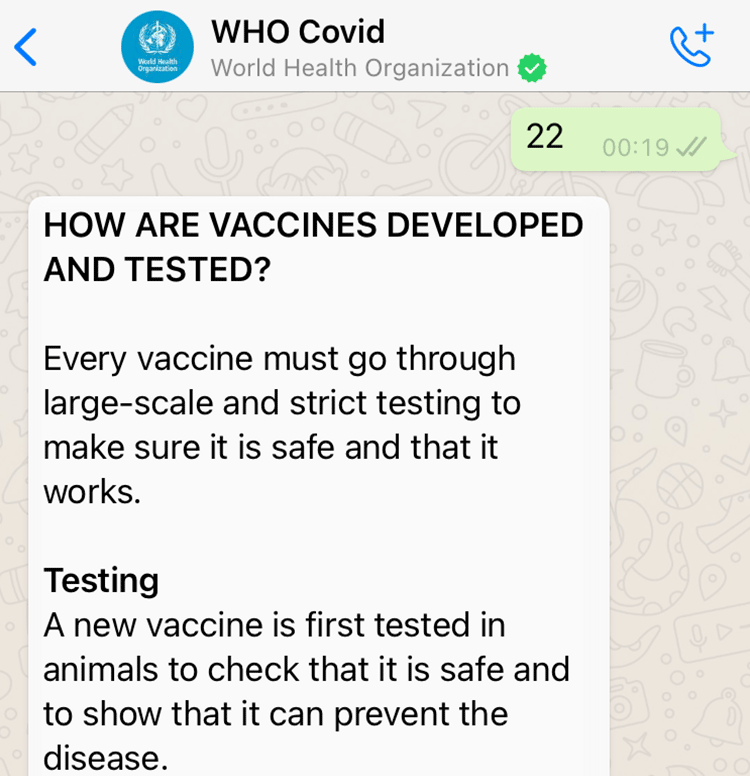 Staying up to date 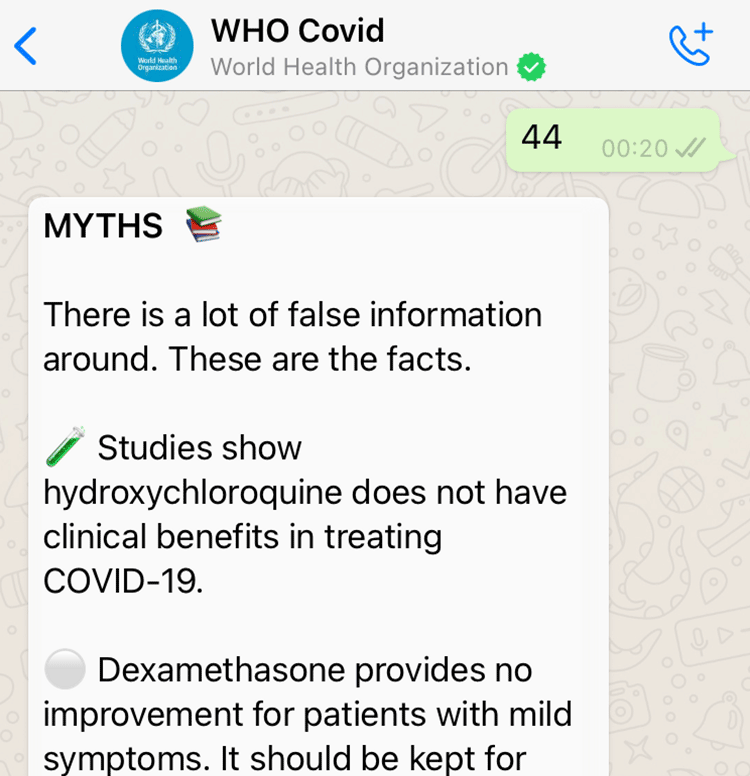 In early 2020 and as Covid-19 quickly became a pandemic, the team at Praekelt.org and Turn.io realised that governments would need a secure mechanism to get safe, real-time information out to communities rapidly.  In March, Praekelt.org (using Turn.io) developed a WhatsApp-based Covid-19 information platform for South Africa's national health department, reaching almost a million users in just days.

Praekelt.org has now provided the same technology free of charge to countries such as Mozambique, Ethiopia, New Zealand and Australia  “We've looked at other platforms to do something similar in South Africa before,” explains Turn.io CTO Simon de Haan, “but we just couldn't commit to it and that was simply because we couldn't give users the kind of security guarantees we can now with WhatsApp."  Building on its work in South Africa and Praekelt.org's long-standing relationship with the WHO, the team reached out about a similar solution but on a global scale. At the same time, Facebook had also been in conversations with the WHO about how it too could help. 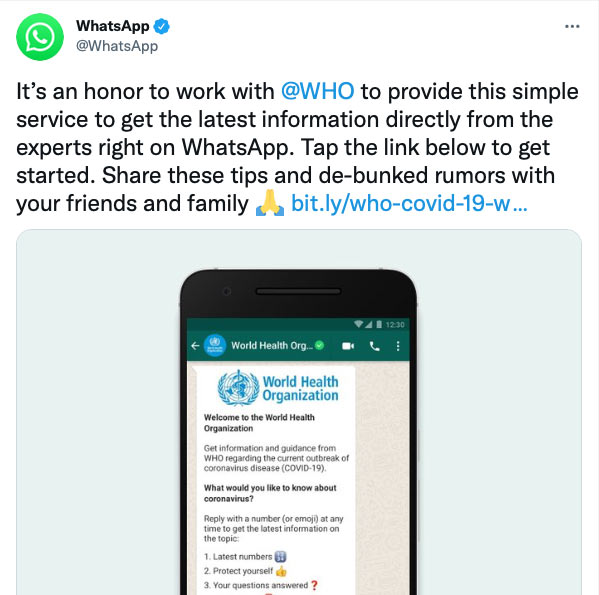 The Health Alert is a collaborative effort with Whatsapp 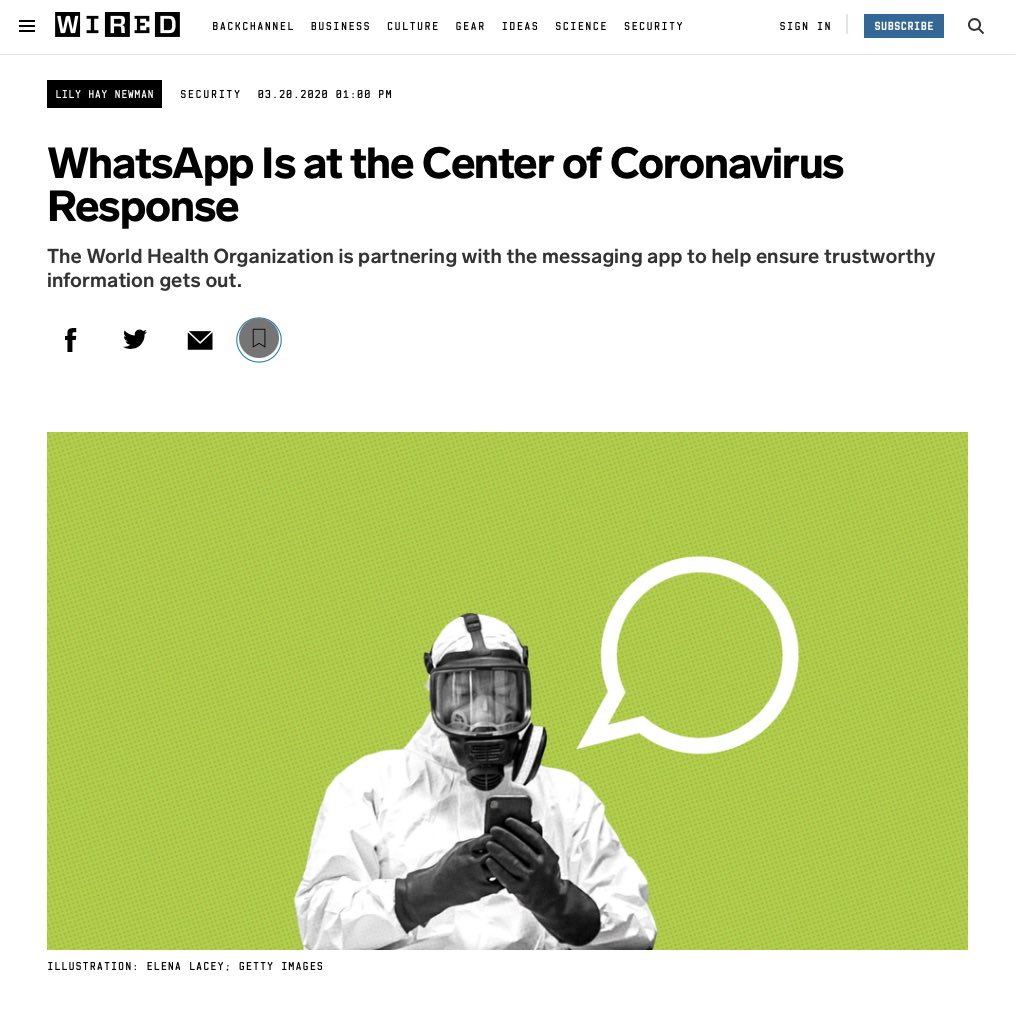 Global support for the fight against misinformation

In just about a week, Praekelt.org and Turn.io — in partnership with the WHO, WhatsApp, Facebook and Amazon Web Services — launched the WHO's WhatsApp Health Alert to promote access to credible information on the pandemic. The initiative marked the WHO's first-ever use of the WhatsApp Business API. The Turn.io team credits the ability to leverage these partnerships alongside a simple initial design with allowing it to launch the initiative within just days — faster than anything they have ever released before.

Turn.io provided the technology for the WhatsApp Health Alert and developed the content alongside the WHO while WhatsApp offered up a team of engineers. Facebook leveraged its enormous user base to promote the service, and Amazon Web Services volunteered its large-scale hosting services. Praekelt.org and Turn.io developers deliberately kept the launch version of the WHO's WhatsApp Health Alert simple: Teams prioritised the content that people needed to know most and kept users interactions with the WhatsApp bot simple and to the point. This initial slimmed-down design and tight-timeframes meant teams updated content manually daily and that the WhatsApp line launched solely in English. However, it also ensured that the system avoided being overwhelmed by traffic when it debuted — escaping the fate of other, similar interventions implemented by countries and that had fallen victim to long downtimes.

Once the initial Turn.io offering for the WHO WhatsApp Health Alert was up and running, the content was automated, new categories of information were added, and the team worked with WHO country offices to translate information into additional languages quickly. 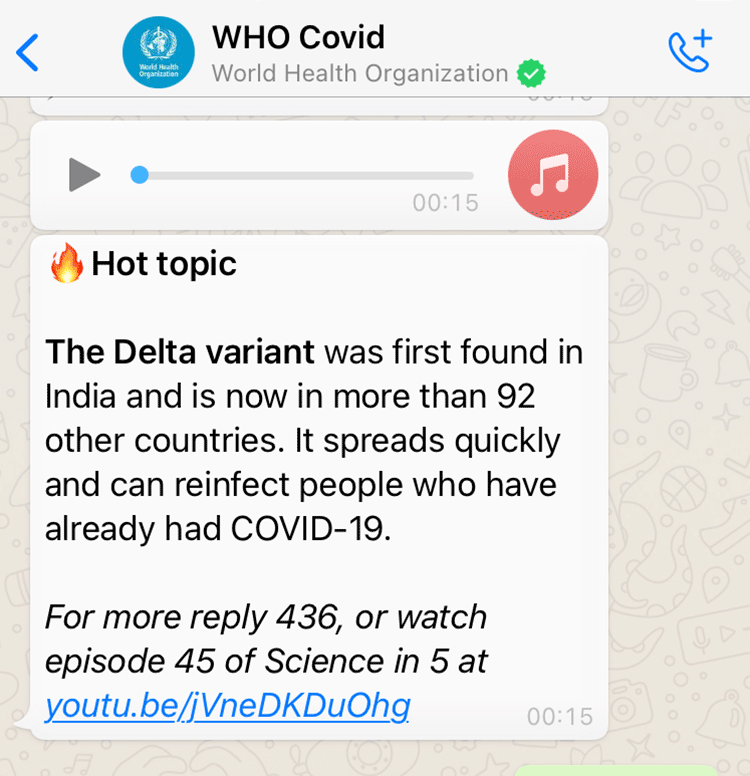 Service in over 20 languages from one number 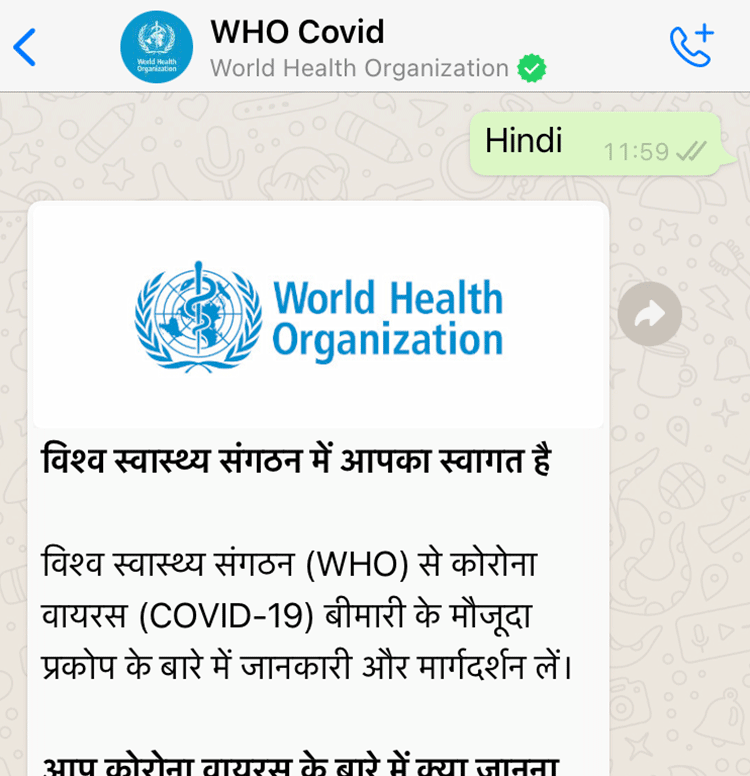 Today, the services are available in nearly 20 languages, including Chinese, Hausa and Tamil and more languages are being added. “For most people in emerging markets where we work, chat is the Internet,” De Haan says. “It's the way people interact with the wider world.” He adds: “Mobile phones are the easiest way for people to access essential services, and that’s a realisation we took to heart many, many years ago. Today, we have over a decade of experience in running and scaling large-scale messaging services in emerging markets.”

"There was tremendous pressure but at the same time, tremendous growth and learning opportunity - and a lot of fun added in being able to deliver a product."

Shaun, Turn.io, Operations and Infrastructure
Remembering a week of quick iteration and development

The WHO's Health Alert for Covid-19 has reached over 14.7 million people around the world. Although Praeklet.org and Turn.io are still charting the impact of the WHO WhatsApp Health Alert, they've seen tremendous demand, especially in those countries witnessing spikes in infections.

It has also received the praise of WHO Director-General Tedros Adhanom Ghebreyesus. "Digital technology gives us an unprecedented opportunity for vital health information to go viral and spread faster than the pandemic, helping us save lives and protect the vulnerable," Ghebreyesus said in a statement. "We are proud to have partners like Facebook and WhatsApp, that are supporting us in reaching billions of people with important health information." The innovation will also likely pave the way for more governments and international agencies to experiment with the power of WhatsApp, which has two billion users worldwide. “WhatsApp was really created for personal use, to chat with family and friends,” WhatsApp’s Global Strategy and Business Development lead at the time Nmachi Jidenma told the international news service Devex in a story about the WHO Health Alert. 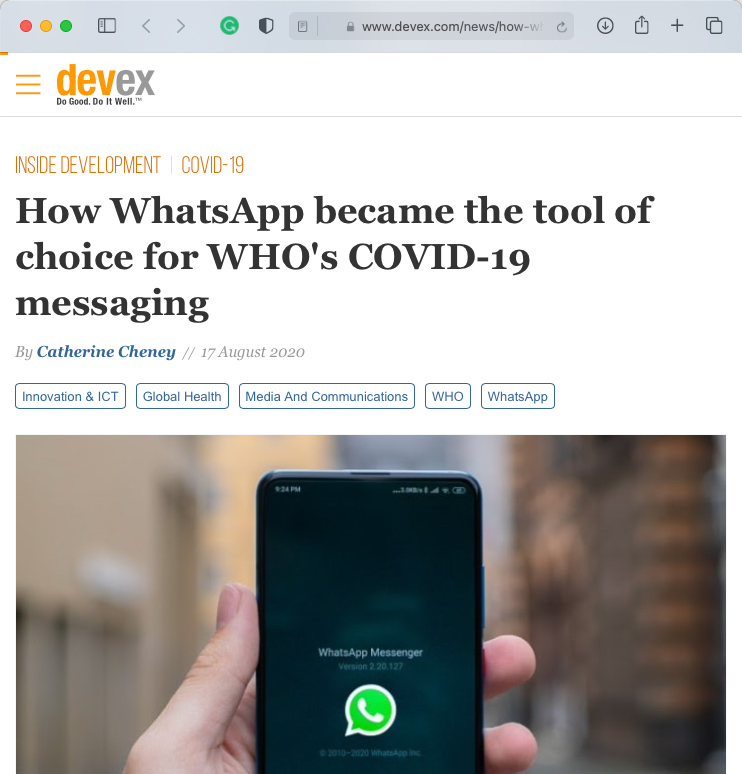 Devex.com story about the Health Alert 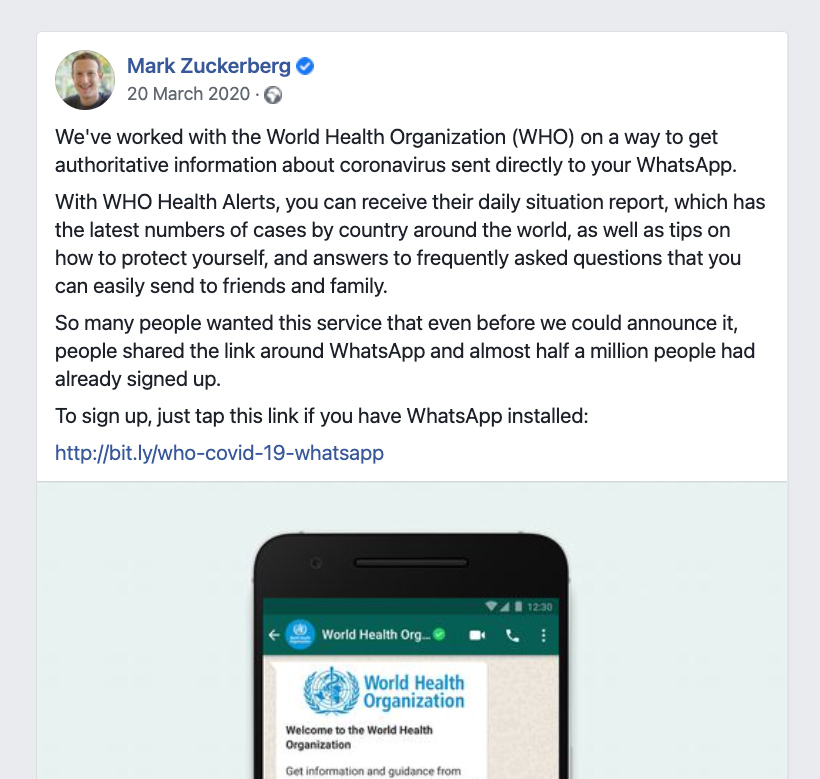 Mark Zuckerberg post noting that half a million people signed up before launch.

Jidenma worked closely with Praekelt.org and Turn.io on the WHO innovation. When WhatsApp saw the demand for governments, nonprofits and businesses to use the application, Jidenma says it created custom tools “to facilitate that work” that allowed Praekelt.org and Turn.io to leverage the tool during the Covid-19 outbreak. She said WhatsApp is moving “deliberately and carefully” as it expands its work with governments, NGOs, and multilaterals, and constantly evaluating its policies to determine what makes sense. "In a pandemic or any health crisis, you need to reach as many people as quickly as possible," Praekelt.org founder Gustav Praekelt explains. "Traditional media isn't interactive — you can't request, for instance, further information — and even some of the largest media outlets have limited reach when compared to WhatsApp."  He continued: "We believe the personalisation and real-time responses that are possible with WhatsApp make it an incredibly valuable tool for complex behaviour change." 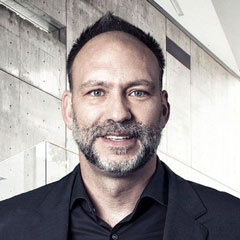 "We believe the personalisation and real-time responses that are possible with WhatsApp make it an incredibly valuable tool for complex behaviour change."

How the service has evolved and expanded

On 10 October 2020, World Mental Health Day, the World Health Organization (WHO) launched the WHO Stress Management Guide on WhatsApp. Developed in partnership with Praekelt.org, the guide is a module on the WHO Health Alert app. 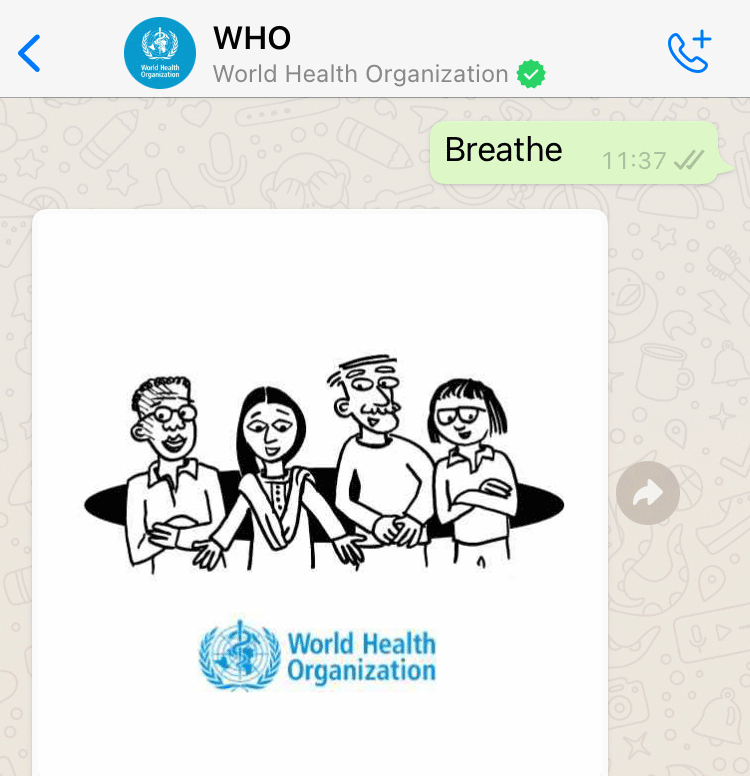 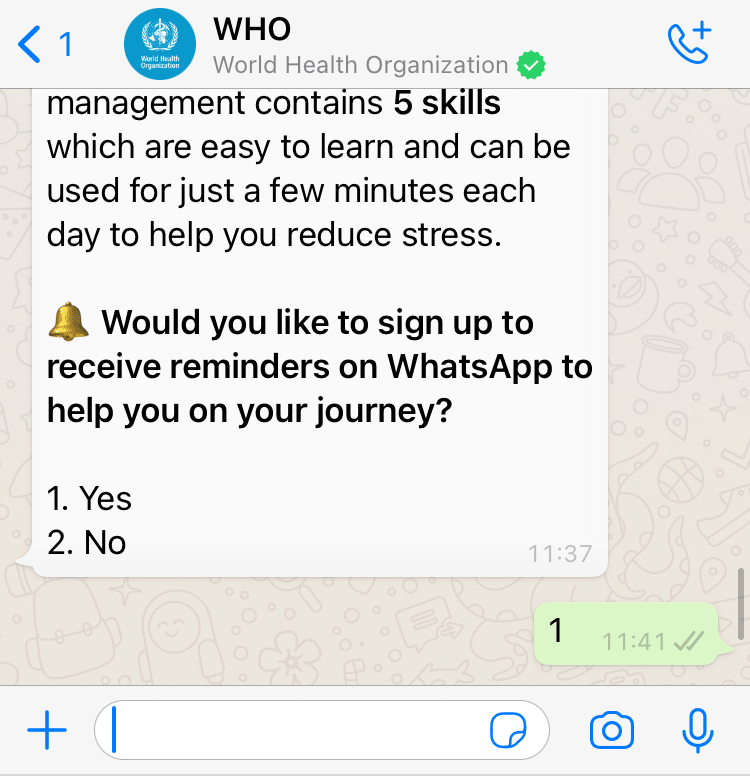 The module provides a guided 5-day stress management journey including tips, exercises and audio guides to help promote mindfulness, and techniques for reducing stress. It is based on the WHO publication, Doing What Matters in Times of Stress: An Illustrated Guide which was published in April 2020 as a way of equipping people with practical skills to help cope with stress.

Informed by evidence and extensive field testing, the guide is for anyone who experiences stress, wherever they live and whatever their circumstances – significantly enhanced by being available on WhatsApp.

Doing What Matters in Times of Stress: An Illustrated Guide

The work Praekelt.org and WHO are doing together is continuously evolving. As the teams look to challenges such as the opening up of businesses and schools safely, and the distribution of vaccines, a secure, universally available chat platform for WHO will continue to play an integral part in helping countries overcome the challenges of Covid-19.

Building a chatbot is hard. We make it easy. 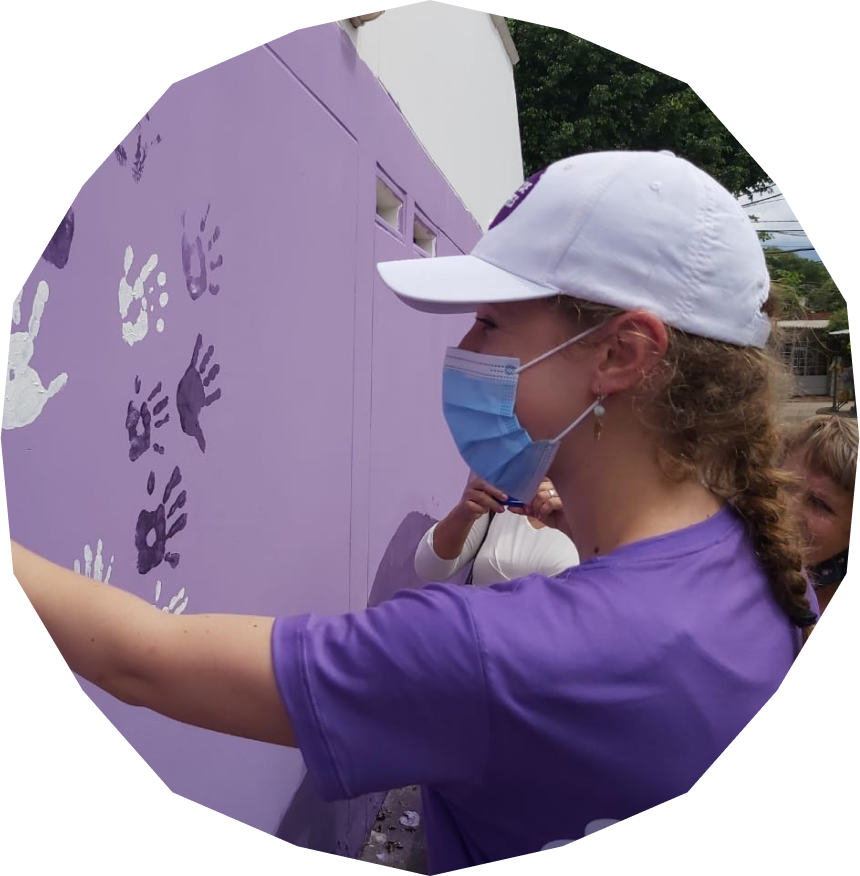